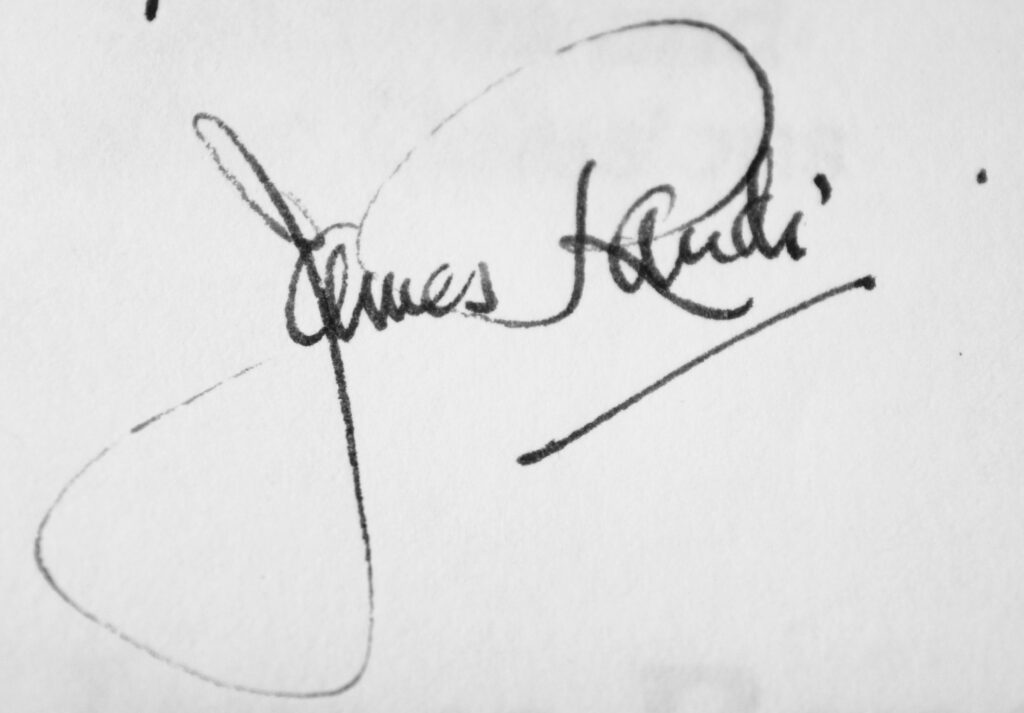 On October 20th, 2020, we all had to say a final Good-Bye to James Randi, one of the most influential personalities of our skeptical movement, the creator of the modern One Million Challenge, the communicator of the scientific method and the uncoverer of frauds.

The Amaz!ng Randi touched the lives of many skeptics, for some, he was the eye-opener, the one to put them on the skeptic track, for others, he was the powerhouse that kept them on their skeptic toes. For us all, he was a legend.

Here are the wonderful stories and memories we have of him: 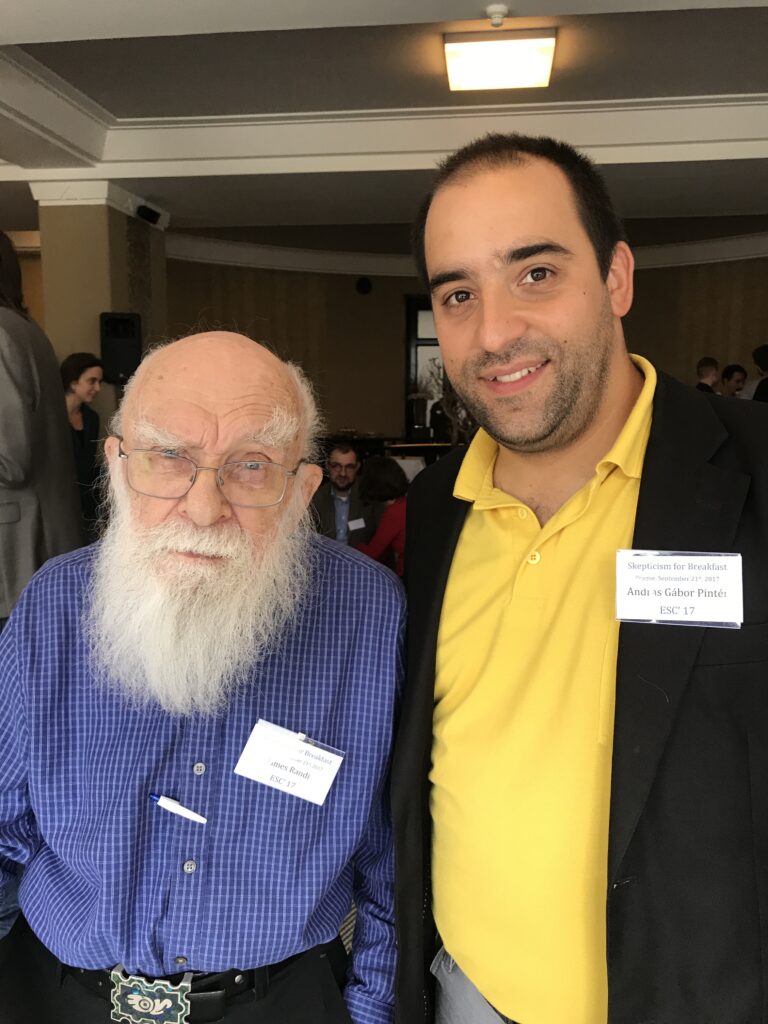 András Gábor Pintér, The European Skeptics Podcast, Hungarian Skeptics
He has inspired me since I was 16. Seeing him live in 2010 in London, interviewing him for the ESP and meeting him in person in 2017 were among the highlights of my skeptical activism. He was truly Amaz!ng! 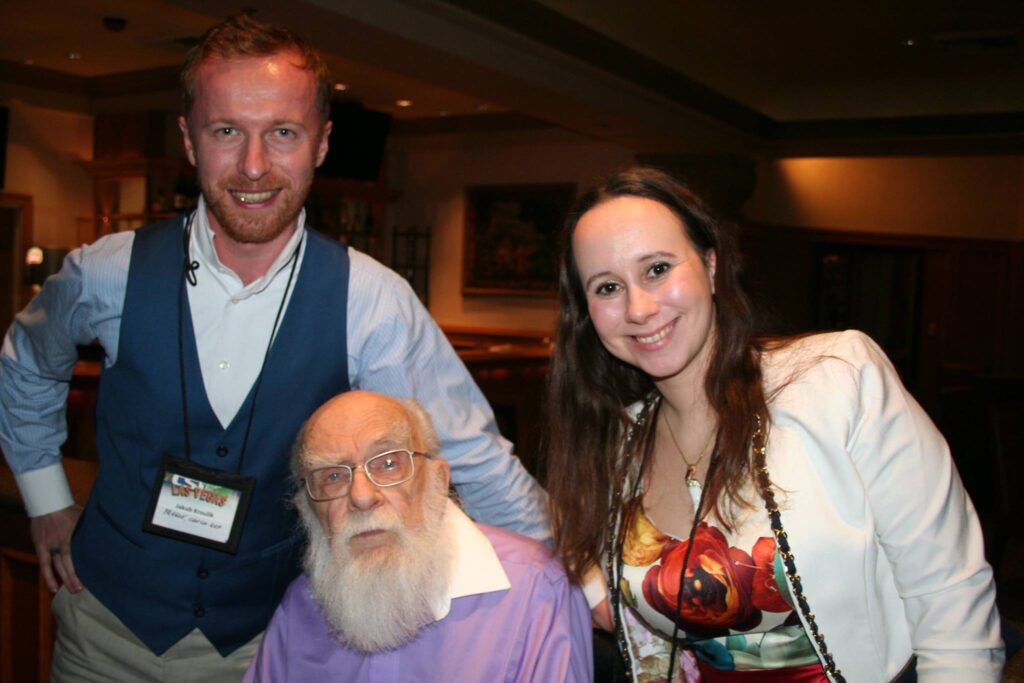 Claire Klingenberg, ECSO, Czech Skeptics
The first time I met him was in 2016 in Las Vegas. He seemed larger than life! He was a hero I will never regret meeting. Randi truly was, and still is, with his questioning eyebrow, the spirit of skepticism. 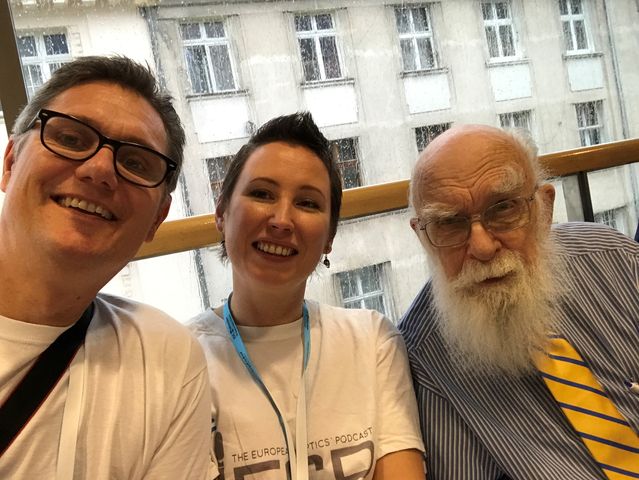 Pontus Böckman, The European Skeptics Podcast, Swedish Skeptics
I had the great privilege and luck to meet up with Randi on his final trip to Europe. It was during the European Skeptics Congress in Poland 2017 and he couldn’t have been more generous with his time. He showed sincere interest in my opinions, freely shared his own, joked around and even performed some magic tricks just for me, personally. This selfie is with Jelena Levin and myself just after he made a napkin disappear right in front of my eyes. I consider myself so lucky for having met him. A true legend of our time. 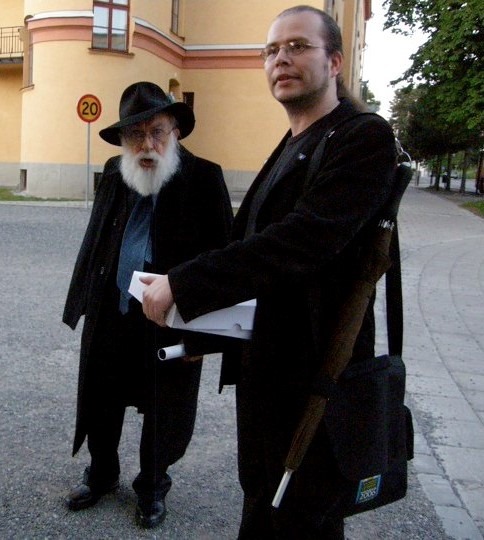 Per Johan Råsmark, Mentalist, Swedish Skeptics
No, James Randi was not my hero, I simply do not have heros. But I do think he did some amazing things for the sceptical movement. (Of course “amazing”.) That said I realise that few people have had more of an impact on my life. When I began taking an interest in critical thinking Randi was one of the big stars and I enjoyed his debunking of paranormal claims. At a moment in my life when I had too much time on my hands (I was just doing a Ph.D.) and had a sufficient amount of money I went to The Amazing Meeting 2 in Las Vegas. A conference for sceptics and arranged by the JREF (James Randi Educational Foundation). I just thought it might be fun. At that conference I met some of the most wonderful people that I am happy to be able to call my friends. I did get to speak to Randi himself since he was very accessible at the conference. There were only a small number of us, perhaps 200-250. Without Randi I would not have ventured to Vegas, and never met all those then new, and now old, friends. Without Randi I would not have met those other people as well, the liars and cheats that made me so frustrated. People who challenged my idea of how the world works. That was when I picked up some books from a Las Vegas magic store. The amount of books have grown and I am even known to perform things from them now and again. During my time as a post doc in Prague I had an opportunity to frequent some magic clubs because of my new interest, I got to know people in the magic community and I got even more friends, also thanks to Randi but in a round about way. I did also go to the meetings of the Czech sceptics and tried to understand as much as possible (Czech is a weird language), but I might have done that even without Randi’s influence on my life. So thanks to Randi I have sceptic friends all over the world, and magic friends all over the world and a very weird life involved in both these communities, instead of doing some well paid research somewhere. Among the many voices praising the man and his work today there will be some trying to tear him down. James Randi was human, he was not perfect and some people seem unable to understand that a person need not be perfect to deserve respect, fame, and even praise. There may also be some made up allegations from a certain litigious individual. Those few voices are drowned by those who were influenced by him, or the person they saw on stage, in a positive way. He was absolutely a showman and knew how to get publicity but his great-psychic-investigator-persona never felt out of tune, it was him, an exaggerated version of him, but still him. I think that his humanity is well represented in what I consider the most important advice I associate with him. I phrase it thus since I do not think he was the first to give it and I cannot say why I associate it with him I think it comes from an interview with Penn Jillette. It does not have anything to do with science or scepticism, nor with magical effects. It’s a piece of advice that anyone who stands on a stage should bear in mind, always stay after the show for the fans; it is because of them that you are on stage, they are the most important part of the show, not you. 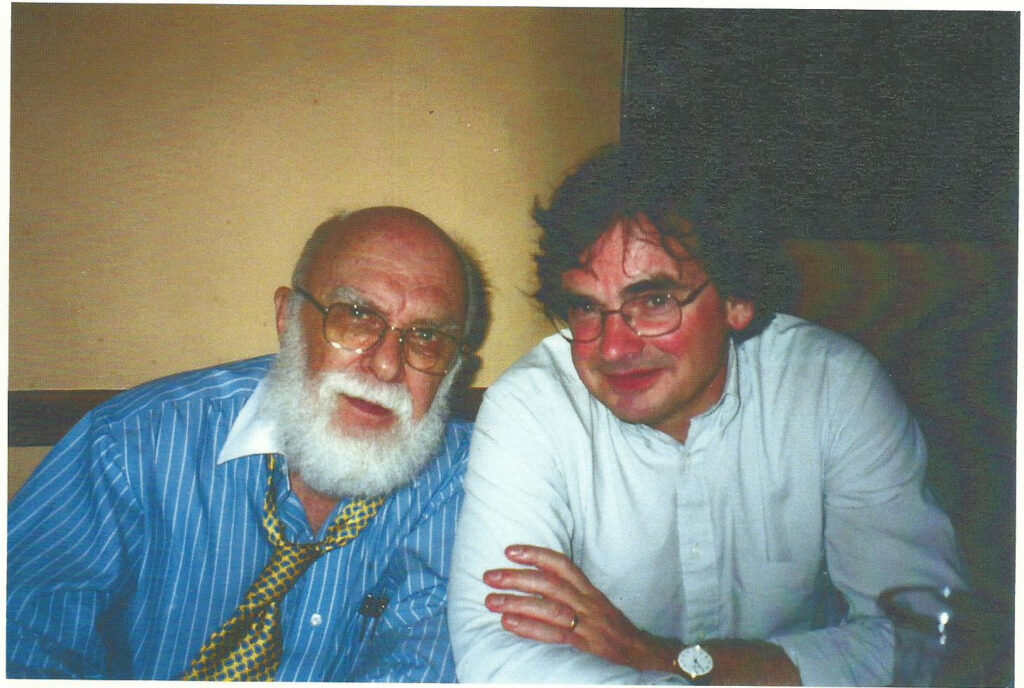 Michael Heap, Psychologist, ASKE
This one was taken in London in 2002 when Randi came to record a BBC Horizon programme reporting a non-clinical test of homeopathy involving the combined efforts of five medical centres. Had the test been successful his organisation would have paid a million dollars to the researchers. They didn’t have to. On the night the photo was taken he was due to give a lecture either at Oxford or Cambridge Uni (can’t recall which) but they cancelled it at the last minute (they discovered he was not an academic). I was able to book a lecture room at UCL which, despite the short notice, was packed. A few of us went to a restaurant afterwards (see photo) and he entertained us with lots of magic tricks.
He was a real gentleman and had an extraordinary life. 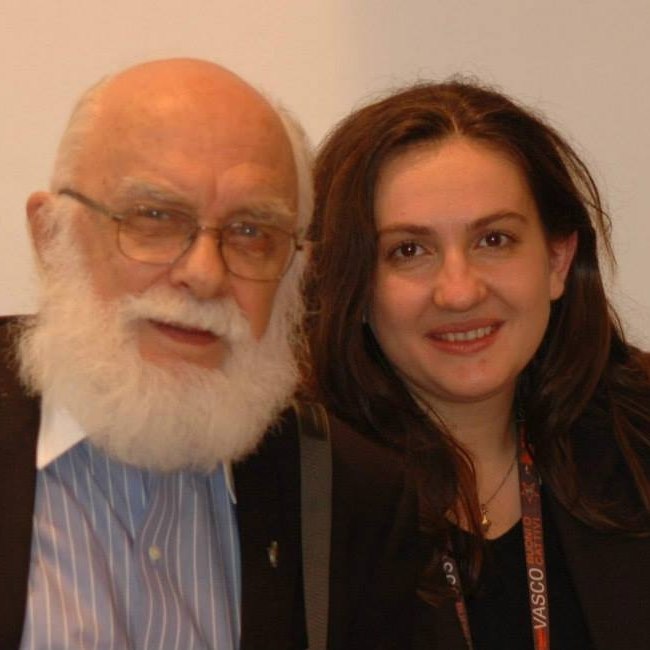 Paola De Gobbi, CICAP – Italian Skeptics
“She’ll miss me!” We will all miss you…  ♡
I have a photo of the first event in which I’ve known him better. It was taken at the World Skeptic Congress in Italy (a huge work to organize it, and the days I became one of the thirteen effective members of CICAP). We were in the end after people went away. I was really tired and happy, sitting on a table. He comes close to me and said to Massimo, “she will miss me!” and Alejandro Borgo took the shot, it is so tender his smile… 🙂 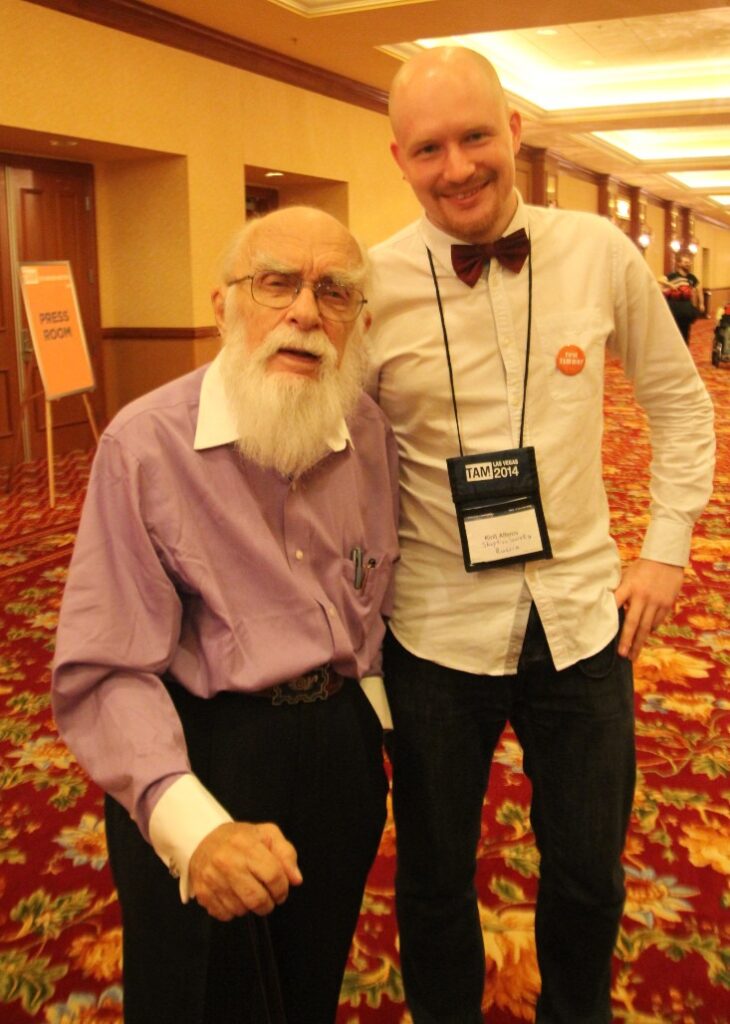 Kirill Alferov (Louigi Verona), founder of a Russian-speaking Skeptics Society
I first met Randi at TAM 2014. He immediately insisted that I speak at one of the workshops and tell people about the situation in Russia. So, imagine the honor of not only having visited TAM, but also having participated in one!
And later that day we were showing magic tricks to each other, and people gathered around… It was such a memorable day. When I was no longer involved in skeptical activism and living in Berlin, I heard that there is a 2017 European Skeptics’ Congress in Poland. I realized that this could be my last chance to see Randi and I went there. It was a wonderful time, more magic tricks, and I also connected with many European skeptics. Randi was an incredible magician and entertainer. But what he also added to the skeptical movement was his genuine concern for victims of pseudoscience. He wasn’t in it for laughs or arguments, he really cared. And it showed in everything he said and did. He was a huge influence on me and he will be greatly missed.

The emergency caused by the spread Covid-19 is putting a strain on our health system and demands everyone’s collaboration to limit undesirable consequences.

CICAP, in accordance with its mandate, focuses on the role of information, which now more than ever has to be both clear and accurate. In recent days the dissemination of non fact-checked news, which then proved to be false, spanning from alleged miraculous cures to pure alarmism, has fuelled confusion and hindered efforts to deal with the epidemic.

CICAP asks the news media to honour their vital social responsibility and to exercise the utmost care in verifying news. In this crucial phase, going for the big headline and spreading unverified news is more than ever counter-productive.

We understand that journalism has an ethical obligation to timely reporting, but this must not be at the expense of fact-checking and contextualization that would allow for an autonomous and objective evaluation by the reader.

in accordance with the advisements of the World Health Organization (though we still disagree on CAM issues) and national officials, skeptical organisations across Europe are temporarily closing their doors.

However, please do check out your local organisation’s website – there is enough content to hold you over for at least a month.

If you are interested in knowing updates concerning the virus, check the following websites and remember, WASH YOUR HANDS:

In the article linked on the left, Dan Katz, licensed psychologist and psychotherapist, and member of the board of VoF (aka the Swedish Skeptics Society), explains why Thomas Erikson’s success with his book “Surrounded by Idiots” is one of the biggest pseudoscience scandals in recent history. The article has been translated from Swedish to English.

The book and its successors in the “Surrounded by…” series is based on the personality test known as DISC (or DISA) which has no scientific background whatsoever. In spite of this, the books have sold in huge numbers and are now translated to several other languages, including English. They are currently being promoted abroad in the US, the UK, Australia and elsewhere.

VoF urges Skeptics around the world to read the linked article and create awareness locally that the books and the theory they describe are utter nonsense. Actions that can be taken are contacting the media and local publishers and book sellers to make them aware that this is not scientific, and that Thomas Erikson has no academic credentials even though for example Amazon calls him a “behavioral scientist”.

Thomas Erikson was awarded the Swedish Skeptics’ satirical “Confounderer of the Year” award for 2018.

For more info, please contact the Swedish Skeptics at info(at)vof.se

UPDATE: The day after this was posted, the topic was picked up by neurologist Dr Steve Novella on his Neurologica blog, based on this article. His input can be found here.

Michael Marshall Project Director of UK’s Good Thinking recently visited King Alfred’s Academy in Oxfordshire on an unusual mission: to highlight proofs that the Earth is actually flat, and to encourage students to question the shape of their world. The goal of the talk was actually to encourage critical thinking, and to get students to question what sources they can trust and what arguments can be taken as credible.